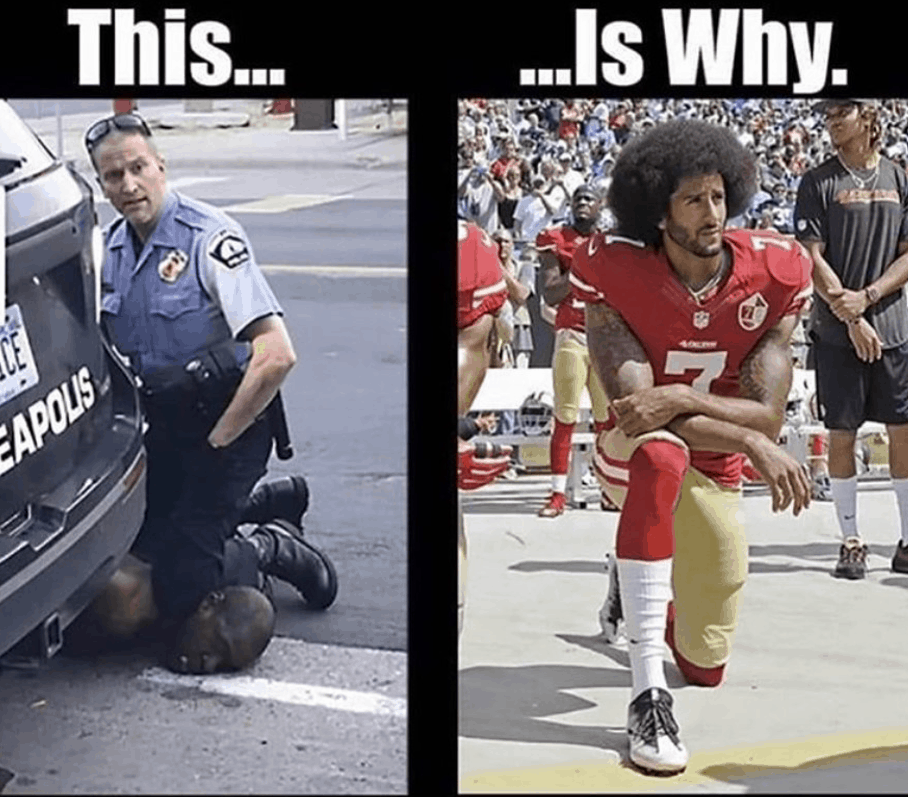 A Tragic Death and the Memory of a Missed Opportunity

By now you’ve hopefully heard the story of how George Floyd’s life ended.  I am deeply saddened, angered and disappointed to learn of yet another black man’s life ending prematurely and in such a brutal and senseless way.  He was murdered by a man hired and sworn to protect and serve his community.

I could go on and on about what a shame it is that this has happened yet again and talk about how I understand why people are burning buildings down and looting stores and throwing rocks and destroying parts of their cities.  Instead, I’ll share a memory that surfaced for me in the wake of this news when I was feeling saddened and helpless about what’s going on and wondering what I wanted to “do” about it.

During the time when Colin Kaepernick started kneeling during the National Anthem (over 3 yrs ago now) I was in the office of the owner of the company I work for when the conversation of these protests came up.  It was me, one of the owners and our COO meeting to discuss a particular piece of business.  Before we got down to business we were making small talk when Colin Kaepernick and his peaceful protests came up.  Our owner said something to the effect of “I understand if they feel the need to protest but do it someplace else…some other time.  Why do I need to be subjected to this?  I turned the game on because I’m looking for entertainment.  And, you’re getting paid millions of dollars to play football…so, just play football”.

I don’t remember exactly what my response was but it definitely wasn’t worth a whole lot and it didn’t express my true belief that high profile figures like Kaepernick were using their platform to bring much needed awareness to millions of people on a critically important topic – that of police brutality against men of color and racial inequality and injustice in this country.

I stayed quiet.  And, therefore I missed a very important opportunity to share my truth, make myself known and possibly stir something inside the minds of the two white men I was in the room with.

Don’t get me wrong, I don’t believe that the owner of our company is a racist – at least in the overt sense of the word.  He was just exercising his white privilege AS I WAS.  He didn’t want to be “bothered” by some athlete/athletes making lots of money protesting something that had little to do with him.  And I was just a bystander (more than anything else) – sitting in the comfort of my white privilege not standing up for the protestors actions.  Because, I didn’t need to.  It’s not really my problem either so why speak up?

Well, it IS my problem.  I’m beginning to see that now more than ever before.   These countless, careless, despicable deaths of black men in this country cannot continue to go on like they have been.  And I cannot stand by, quiet and complicit in my own covert racism.

As long as this continues to be THEIR problem, things are never going to change the way that they desperately NEED to change.

Racism in this country is not THEIR problem.  The white supremacists and neo-nazi’s.  The police officer using excessive force’s problem.  This is our problem.

This is my problem.

And until we white Americans really come to terms with that and own that fact, we’ll be at the same place we are today 3 more years later.

This week’s in person MenLiving meeting will be held in Elmhurst and we will be covering the topic of Racism and Racial Injustice.  Our belief is that we ALL need to be having these conversations and we need to be having them NOW.  This is what we can DO.  For George Floyd, his family, his memory, other people of color, this country and for each other.

We hope you’ll join us so we can do this together.