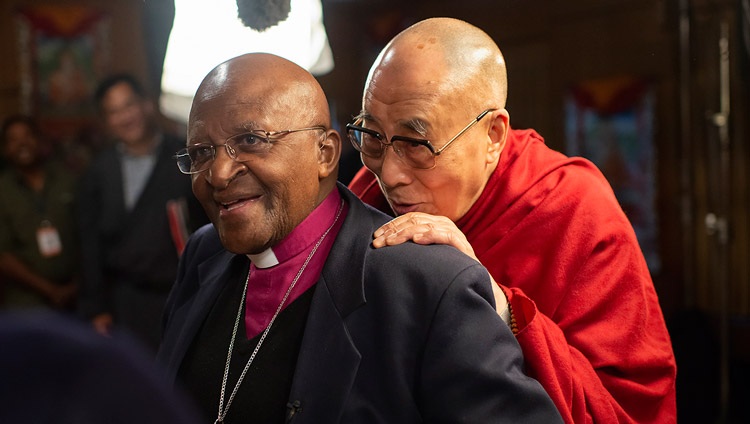 In 2106, the Dalai Lama, Archbishop Desmond Tutu and Douglas Abrams published The Book of Joy: Lasting Happiness in a Changing World. It was a book based on Archbishop Tutu’s visit to the Dalai Lama’s home in Dharamsala, India, to celebrate His Holiness’s eightieth birthday and to create what they hoped would be a gift for others. Looking back on their long lives, they were asked to answer the question: How do we find joy in the face of life’s inevitable suffering? It is a wonderful book that not only answers this question but reveals the deep relationship between these two men.

Monday night, I watched the just released documentary, Mission Joy: Finding Happiness in Troubled Times, that was built from footage captured during the trip and was the essence of the book. A good deal of the documentary is Abrams interviewing these special men. Even as old men, they glow. They are brilliant, fierce, mischievous. They tease each other throughout and they laugh. Belly laughs. Constantly. But the most moving part for me was as they laugh, as they tell intimate and difficult stories, they reach for each other. They hold hands. They lock arms. Eyes. I choke up as I watch them and realize what I am watching is love.

Fast forward 12 hours. I am making my way to a trail for an early morning hike. At the head of the trail are two men arm in arm, one rubs the back of the other. My first thought is a loving gay couple out for an early morning hike. We exchange pleasantries and I hit the trail ahead of them. As I hike it occurs to me, I immediately assumed they were gay because heterosexual men don’t touch like that.

But they do!! I watched it 12 hours ago! Loving, confident, joyful men holding each other. It was beautiful.

So, why do I tell this story? I first must note that I live in a city with a large gay population and the likelihood that my fellow hikers were gay was high. But that fact doesn’t change much. The reality is no matter what trail I was coming upon that would have been my first thought and it bugs me. I am frustrated by the conditioning that inhibits men (Me!) from being fully open with their emotions verbally and physically. So, I tell the story as another step to shed the conditioning and invite you to join me.