By Guest AuthorNovember 30, 2022No Comments

Community Member, Martin McLeish, shares a story of struggle, love and living in the moment.

“Fuck it”, I said. I had had enough. I was the explosives guy at the Silver lake Mine in the Kalgoorlie area.

This meant I would go behind the drill rigs, putting detonators into boosters, dropping them into the drill holes, and later kicking sand over the top of the holes, after the truck had loaded them with Anfo.( ammonium nitrate)

I would then have to tie each hole into the grid of detonator cord. Each detonator was non electric and had to be the right millisecond delay.

This process ensured all detonators went off sequentially and there were no misfires.

It was mid November and hot and dusty working in the pit, and the god dam flies kept getting up my nose and in my eyes.

That was tolerable. What I could not handle were most of the drillers I worked with. Good ole redneck boys with the cerebral capacity of those big blue flies which sit on turds.

The boss had made me the designated driver of the troop carrier we used to get to and from the mine. Why? He knew I was a non drinker, and he knew he had no idea what the blood level alcohol of the others would be each morning.

That was one of the reasons I did not fit in.

“What’s wrong with you mate? Can’t drink like a man?”

I had been sober seven years at that stage. I had finally woken up to why it was I drank, and decided to do something about it. I was not about to try and explain that to the apes, the response would have been,” Weak as piss.” I used to hate driving the pricks to work and back each day. 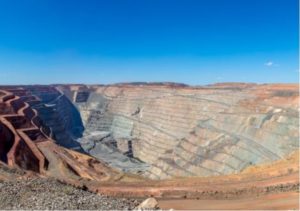 So, it’s Friday @1400. Security has been round the whole of the pit and made sure the area is clear. The siren sounds. I am on the top of the pit a safe distance away. In front of me is the shot detonator which is connected to a five hundred meter wire that goes down to the detonator cord.

“Fire in the hole!” I crank the handle and push the button. Down in the pit, an area close to the size of three football fields lifts like a wave. The multiple explosions unite in one huge crack of thunder.

I get into the Land cruiser and drive back down into the pit looking for any misfires. There are none.

I head back up to the top and arrive at the troop carrier.  The drillers are already seated and I’m greeted with, “C’mon you dopey bastard get us to the pub, we’re thirsty.”

As we approach the city limits, Larry, who has no neck, and small piggy eyes, grabs the steering wheel and turns towards an oncoming vehicle. I have more than a sneaking suspicion that his parents were related.

“Yeeha”, he shouts, “gave me fucking cousin a wake up.” I wrest the wheel back, pull over and get out. I dont say anything.
“Fuck ya,” they say.

By the time I arrived at the office I had made my decision and the burden of six months of stress had lifted. I was getting out of the shithole of the mining town and away from some of the cretins I had worked with.

The boss and his son were waiting for me.

“What happened,” they asked me.

“What did the drillers say,” I asked.

“You spat the dummy for no reason,” said the Boss.

I told him what had happened.
“Right,” he said. “I will sort this out on Monday. You can bet on it.”

“Good oh,” I said. “I won’t be here Monday, I’m done! I did tell you I did not want to drive those pricks every day, and if you had let me take my own vehicle I would still be here.”

“Who the fuck will do your job next week,” he asked.

“James is a qualified shot firer,” I said, “pointing to his son.”
That is the one and only time I have ever quit a job without giving notice. There is however, a time and a place.

I drove back down to Perth the next day and stayed with friends.

We talked about what I might do next. I had a good bank balance and was not in a hurry to get back in the harness.

“Well,” said Paul, “why dont you take a trip to Monkey Mia?”
https://tessomewhere.com/monkey-mia-dolphin-feeding/#Tips_for_the_Dolphin_Feeding_at_Monkey_Mia

“Where,” I asked, “Never heard of the place.”
“Eight hours north of here,” he said. It’s on the coast near Shark Bay. Pretty remote sort of place and its attraction is the fact there is a large pod of wild dolphins which come in each day and interact with the public. 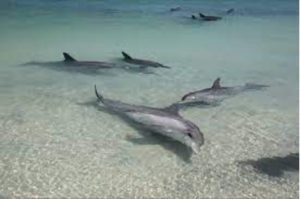 Great fishing too. It’s pretty wild and not much there.”

I got camping gear and left the next day.

As I approached the tiny settlement, I knew I was going to love it. I saw pristine white beaches surrounded by red dunes. 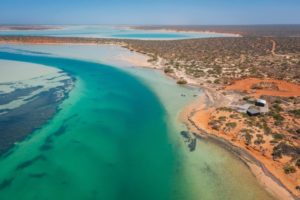 I made camp some distance down the beach, away from the centre and the trailer accommodation for tourists.

Late afternoon, and I threw a line into the water. Almost instantly, bang, a huge King George whiting. Another two followed shortly after. 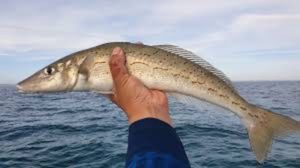 I headed back to my tent with a grin. I knew I could feed myself.

The next day I went down to the beach at the centre. There were some twenty tourists at the water’s edge; some had buckets of fish they had purchased from the ranger.

Someone shouted, “Here they come.” Everyone waded into the clear, warm, shallow water.

I was amazed, and enthralled!

I did not have fish, but still dolphins swam up to my legs and I was able to touch some and they made clicking sounds.

I stayed for over five hours, and then they all suddenly left.

I was down early the next day. I discovered there was a group of American researchers who had been there for some years. Over the next few days they showed me how to identify individuals by their fin shapes. They had named them too.

Four days later I had learned to identify them. That particular day one dolphin had spent time with me. She was gorgeous, a light white colour, and seemed to have this magic smile on her face.“Oh, that’s Holly,” they told me. “She appears to like you.”

The days passed slowly and peacefully. My meditations were awesome. I fished, I slept a lot, and I spent all mornings with the dolphins. I was deeply happy and I could feel the stress washing away in the clear warm water.

Holly was there most days, and would make a beeline for me. I laughed and told myself, “I’m special.”

Late one afternoon I was sitting at the water’s edge, in front of my tent. I had just finished cleaning my catch.

I saw a small bow wave, and then a fin.

I wondered……….could it possibly be?

Yes it was! Holly had come visiting. By herself.

I waded in and sat waste deep in the ocean. She came right up to me, clicking and swimming on her side. She let me stroke her and when I stopped she nudged me…. I kept going.

I was trying to comprehend that that this beautiful wild creature had chosen to interact with me. I knew I was special 

She suddenly swam off, did a u turn and came right back. This time I held her. There are no words!

Ten minutes later, she was gone.

The feeling I was left with was one I can only describe as a deep spiritual connection. Connection with myself, the environment and of course my gorgeous blonde friend.

She did not appear at the beach the following day.

I had been at Monkey Mia for close to three weeks by then. I made the decision to stay one more day, and then head back to Perth.

Late afternoon and once again I am sitting at the water’s edge.

Yes! I can see her approaching the beach.

I’m sitting waste deep in the water. She swims up to me with something in her mouth. It’s a fish! She comes right up to me and releases the fish. It’s dead and falls into my lap.

WTF? Is this real? Yes it is and I start crying.

I am holding her again and I can feel some of my “brokenness” starting to heal. The brokenness of long term isolation.

She is nuzzling and clicking. I realize I am not holding a dolphin; rather it is a ball of pure love.

She moves to pull away. I release her and as she fades into the dusk I say,” Thank you so much baby, I will never forget you.”

Early next morning the 4wd is packed and I am ready to head back to Perth. I stop by the trailer where Alf and Larraine are staying to say goodbye.

I tell Alf that a dolphin brought me a fish.

“Brother,” he says,” whatever it is you have been smoking we’d like some too”. I just smile and bid them Adios.

Six hours into my journey back I get this headache. It turns into the mother of all headaches. Eight hours later I am starting to see three and more of everything. I am concerned at the pain. It is huge.

I make it home and Paul takes me straight to emergency. I am admitted and dont really remember the next few days.

I do know I went into a very black dense place and I got very scared. Pretty sure I was dying.

Into the darkness came my beautiful blond friend, Holly.

She danced on the water, she nuzzled, she cajoled, and she smiled. She told me stuff too.  I can’t actually remember what she said, but I knew it was going to be alright.

I opened my eyes to find a nurse standing over me with a thermometer in my ear.

“Welcome back,” she said. “You were gone for a while. The doctor will come and talk to you now. Is Holly someone we should contact for you?”

I shook my head.

It turned out I had had a tumour on my pituitary gland. It had got big enough to squash the gland and in the process it cut off its own blood supply and killed itself. Non cancerous! My health has been stable and well managed since.

I went back up to Monkey Mia six months later. The place had been done up and now was full of tourists.  The dolphins had not been seen for a week or two.

Sometimes you just cannot go back

It is now illegal to touch wild dolphins