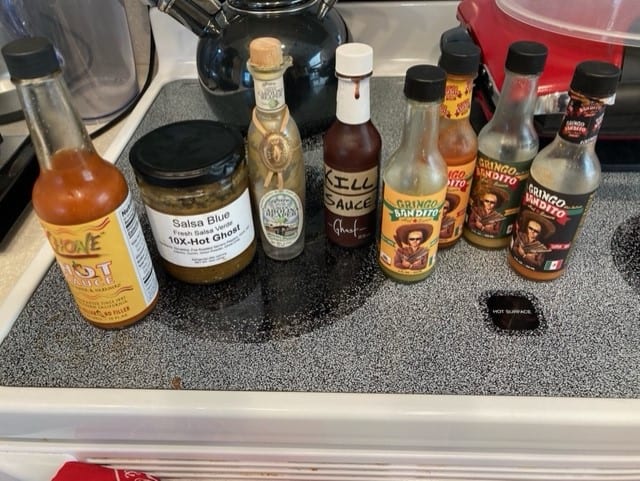 I like hot sauce / spicy stuff, and I’ve historically felt constrained by just whether or not the thing is “already spicy”.  I’ve been getting joy lately by figuring out how to make my food spicy, whether it was intended that way or not.  It feels good psychologically, making it taste the way I enjoy – and reminding me it’s OK to want spicy food even if it’s not “on the menu” or “intended to be that way”.

A few hot/spicy things I’ve discovered lately – if you like spicy food or hot sauce, maybe they’ll spur some ideas:

1) Beef jerky – never tastes spicy to me, and I’ve discovered and been enjoying a variety of beef jerky’s that use the “Carolina Reaper” pepper.  It’s the first beef jerky that to me truly tastes spicy.

2) Hot Sauce – been enjoying different hot sauces, and in the process of learning about Dexter Holland lead singer of the rock band The Offspring, discovered as a personal hobby he made his own hot sauce “Gringo Bandito”.  Cool guy.  Tried out a 4-pack of the different flavors and it’s a good value and I enjoy it.  It’s also kind of cool story – as he makes it as a hobby, and it’s sold more than a million bottles.

3) Finally – possibly most earth-shattering – I picked up some cookie dough ice cream last week – and I wish it had more cookie dough and/or peanut butter.  But…instead of just feeling that and being disappointed…I just added peanut butter to it, and it tastes better.  Surprisingly liberating.  Also – most importantly – I tried adding hot sauce to it.  I never would have thought adding hot sauce to ice cream would be good – and it was amazing.  Just a touch gave it a really nice spice.

Anyway – I’ve been getting joy by feeling comfortable adding hot sauce to whatever I want, not feeling constrained by whether that’s OK or normal to do, and that’s been bringing my joy and making me feel younger this month.  Maybe, this can inspire you to do something different that you normally wouldn’t because it’s “not normal”, that brings you joy too!

Here’s to finding your own “hot sauce on ice cream”!