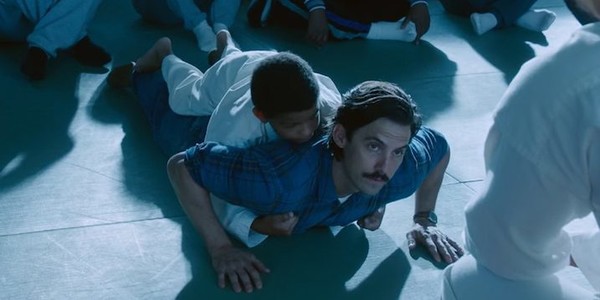 There are plenty of emotional moments in This is Us, one of the many reasons it’s my favorite show. But one scene in particular choked me up, when Randall, then a 9-year-old boy, was in his karate class with his father observing from the side. The karate instructor invited all the other fathers to surround Randall, and then invited his father Jack to get in the pushup position and have Randall lay down on his back. He told Jack to start doing pushups with the weight of his son on his back.

“As Randall’s father you are his foundation, your back was built to carry your son through life, are you willing to hold him up no matter what comes his way?”

As Jack is running out of energy doing his pushups with his son in tow, the instructor turns to the other fathers observing the exercise and says, “Randall, we are your community… when things get hard, we are the ones that are going to be holding each other up.”

My interpretation of this is that it takes a village to raise our children, and while the parents bear the most weight, the community is there to uplift. The scene from this TV show is an example of type of parental and village initiation, and I judge that we do not involve our children in enough of these rituals.

I have three daughters, and when they turned 13, my wife invited all the women in their lives to gather around them. They women wrote letters to my daughters and shared their own stories of challenge. They let my daughters know that they would be a part of their village if they were ever needed. This is essential to the well-being of my daughters as they grow into young women. They know that when the going gets tough, they have this room full of powerful women to lean on.

I have a friend in MenLiving named Mike, and he has three sons Jack (16) and Keil and Sam (14).  I’ve known these boys since they were preschoolers.  Mike asked me to write a letter to all three of his boys when they turned 14, with an invitation to say anything that might help them navigate through the teenage years. Below is my most recent letter to Keil and Sam:

Youd dad invited me to write down a few words leading up to your 14-year-old birthday.  I wrote a letter to Jack a few years ago so now it’s your turn.  You’re gonna have to share this letter with each other, but my hope is that you both get something out of it.  I’m writing this letter because I think it’s the letter I would have wanted to receive when I was 14.  So here goes…

I know some stories that you might believe because I believed them at 14:

Below is a list of things I’ve learned about what it really means to be a man:

My hope is that this letter will support you both as you navigate through this challenging and beautiful world.  I am a believer that it takes a team to evolve from boyhood to manhood.  I want to be on your team.  If you ever need any support and it’s too heavy for you to bring it up to your mom or dad or Kelly or Jack or each other, I want to be on your team- and I will be there whenever you need it.  It could be tomorrow, next week, next month, next year, or in ten years…just know I’m here. Happy Birthday to you fine young men!!!