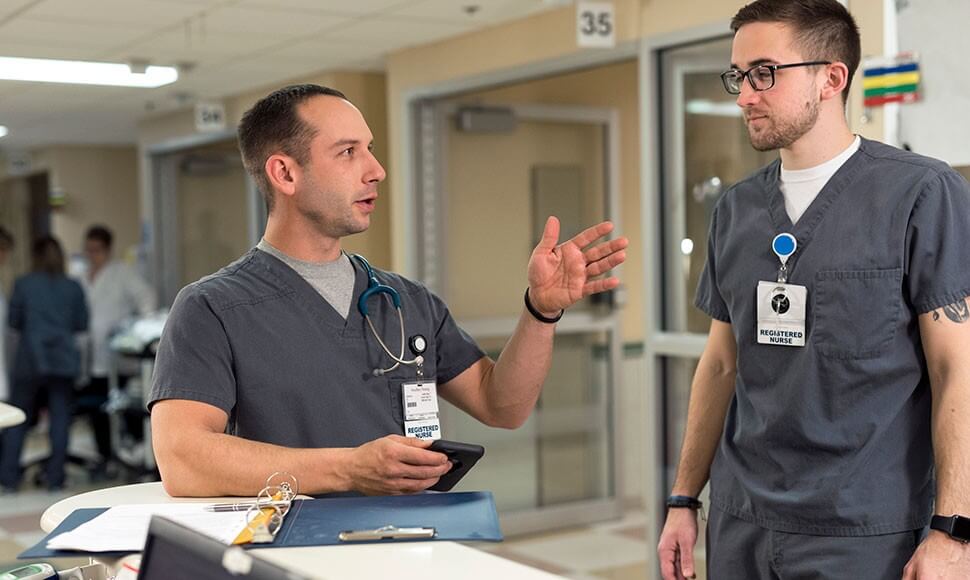 On Tuesday’s episode of Zen Parenting Radio, a podcast cohosted by our Executive Director, Todd Adams and his wife, Cathy, the Adams talked about her mom’s recent passing (Judy Cassani passed away on January 9th…Condolences, Cathy 🙏). During the discussion, they thanked the wonderful caregivers that supported her mom over the last couple of years. Todd gave particular thanks to the few male caregivers on staff. The Adams go on to talk about how men are underrepresented in what are often to referred to as “pink jobs.” Pink jobs would be fields overwhelmingly populated with women like nursing, therapy, and teaching. This subject has been top of mind for me lately given all the reports, research and data on men “checking out” of the economy. Can we get men (actually most of us!) to not look at pink as a girl’s color and pink jobs not as women’s work?

Let’s take a look at healthcare and specifically nursing.  Last Friday, the Washington Post reported that “legions of nurses have left the field, retired early, or switched jobs. Some 100,000 nurses left the industry between 2020 and 2021, according to an industry trade-journal estimate. Although there were 4.4 million registered nurses with active licenses as of 2021, according to the National Council of State Boards of Nursing, only 3 million people were employed as nurses, according to the Department of Labor.” Further, a 2022 survey by the staffing agency ShiftMed found that two-thirds of nurses say they are inclined to leave the profession within the next two years. And with an aging population, mean demand for nurses will continue to soar in the coming years. By 2025, the United States is projected to be between 200,000 and 450,000 nurses short, according to a McKinsey & Co. report.

This situation feels like a shit show doesn’t it?

Add these numbers for consideration. According to the U.S. Bureau of Labor Statistics, 13.3% of registered nurses in 2021 were men, up from 7% in 2008. That seems like great news, yet when we look at college major distribution for the 22-24 age group only 2.7% of the male population is seeking degrees in Medical and Health Sciences and Services while 12.8% of the female population is pursuing careers in this field. With all the emphasis on STEM jobs for women, it is likely that this percentage of women focused on health sciences will deteriorate.

Now, consider, men have been withdrawing from the labor force for decades. From Richard Reeves book, Of Boys and Men, “Over the last three decades,” write economists David Autor and Melanie Wasserman, “the labor market trajectory of males in the U.S. has turned downward along four dimensions: skills acquisition; employment rates; occupational stature; and real wage levels.” Labor force participation among men in the U.S. has dropped by 7 percentage points over the last half century, from 96 to 89%. Even before COVID cratered the economy in 2020, there were 9 million men of prime working age who were not in employment.”

So, I am wondering, can we “kill two birds with one stone?” Can we get more men back in the game and satisfy the nursing crisis? Lots of hurdles, no doubt. But if one of the hurdles is the job is not “manly” enough, we can knock that one over right now. The idea that work like nursing, (or teaching or social work) is only for women is ridiculous. Just like the idea that science, technology, engineering, and math are only for men.

Thoughts? How about ideas on how to knock over more hurdles?