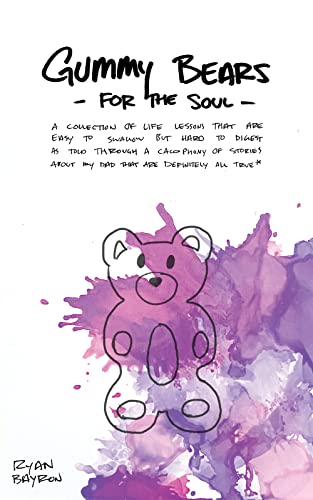 5:15 is story from Ryan Bayron’s first book, Gummy Bears for the Soul: A Collection of Life Lessons That Are Easy To Chew But Hard To Digest As Told Through A Cacophony of Stories About My Dad That Are Definitely All True*.

My first gymnastics coach had an alarm on his watch that went off at 5:15 every evening. He didn’t know why. There was nothing inherently special about 5:15. He had gotten the watch used and never took the time to figure out how to disable or reset the alarm.

Over the years, I watched as he slowly developed an affinity for his 5:15 alarm. Every day, he’d stop what he was doing when it went off and announce to whoever was in immediate proximity that it was 5:15. It became a thing. A part of the culture at that gym.

We’d fantasize about Fiver’s previous owners, because of course we named the watch. What was going on in their lives that made 5:15 so important? Was that the time to take their meds? Pick up their kids? Leave work? Was it a reminder to start making dinner? There was absolutely no way any of us would ever know the answer, so we were content to engage with the question itself. We had no idea that we were practicing mysticism. We were the Mystics of the Watch. The Watchers.

Back then, when a watch died, it was actually less work to just get a new one than to find one of those tiny, coin shaped batteries, pry open the back, replace the battery, and set the time to the nearest clock you trust—which, by the way, was no clock ever. All clocks were at least a few seconds off from one another, and for some reason, no one cared.

But you know what everyone did care about? 5:15.

The first day Fiver’s infamous alarm didn’t go off, one of my

teammates who we called Beefy (that wasn’t his real name), happened to look at the wall clock around 5:50, realized we’d missed the alarm, spun around to Coach, and cried “WE MISSED FIVE FIFTEEN!” with enough panic in his voice to send another teammate who we called Tag (also not his real name) into a premature release of his high bar dismount, sending him sailing through the air like a rag doll and face planting into the mat. No one cared that he missed the dismount. No one cared that it looked hilarious1.

But you know what everyone did care about? 5:15.

It took forever for Coach to get his watch situation figured out. In the meantime, everyone in the gym began to set their own alarms for 5:15, just to make sure we wouldn’t miss it again. At one point, it was the most eerily beautiful thing, because all gym activity would slow to an anticipatory pause, as we all eagerly awaited a chorus of at least a dozen watch alarms (all at least a few seconds off from one another, obvi). Satisfied grins would light up faces as a symphony of beeps and tweets echoed off the concrete laden gym walls. It’s like if fireflies were a sound.

Eventually Coach, in his words, “got a new damn watch, read the damn user’s manual, figured out how to set the damn alarm, and restored order to the damn universe.” The first time his brand spankin’ new 5:15 alarm went off on his brand spankin’ new watch, who we called Sixer (totally its real name), everyone in the gym erupted in an explosion of uproarious fanfare. Well, everyone except Tag, who, as luck would have it, was in the middle of botching yet another high bar dismount on account of his being startled by said fanfare. He was a jumpy fella, that Tagger.

I don’t know if he had the worst timing, or the absolute best.

I really miss that guy.

You can purchase Gummy Bears for the Soul here at Amazon.