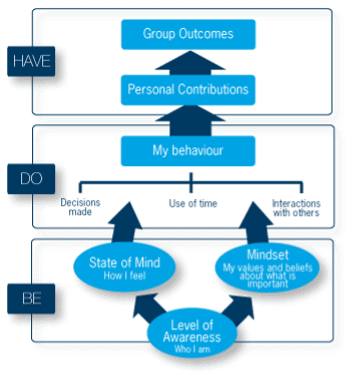 By Shaun EmersonApril 21, 2021No Comments

What does this quote open up your awareness to? Can you reflect on an experience that might bring it alive? Perhaps if it has some truth, human development (love) has more to do with who we are than what we do.

Understanding the principle of “be-do-have” appears to be counterintuitive in our everyday first-world lives. I recently attended a meeting concerning social and economic issues within an underserved community. Everyone there wanted to “do” something while never even questioning aspects of “being.” In contrast, the genesis of all doing is based on being. If one’s so-called being is fraught with fear and dysfunction, expect the doing or the outcome to have the same characteristics. Does that make sense? Here’s more:

Being starts with a mindset, thoughts, paradigms, biases, hypocrisies, motives, dysfunctions, mostly hidden from view and left unattended. Mindsets are dynamic and are never static.

“The unexamined life is not worth living” attributed to Socrates.

According to Dr. Roberto Assagioli, our culture values action; most actions are mindless, unconscious, or are essentially sleepwalking.

The “doing” is the action based on what’s in your heart, fueled by the beliefs you have about yourself and others.

If be, do, have has relevancy we foolishly act, not clear of who we are (be). And wonder why we are still “unhappy.” Whereas if the real focus is who we are (be), the doing will take care of itself! That’s it! Easy, rarely done!

I share the graphic above for your contemplation. I invite you to take a moment to daily reflect on it, and would love to explore with you. You can reach me at learningtobehumanpsl@gmail.com.