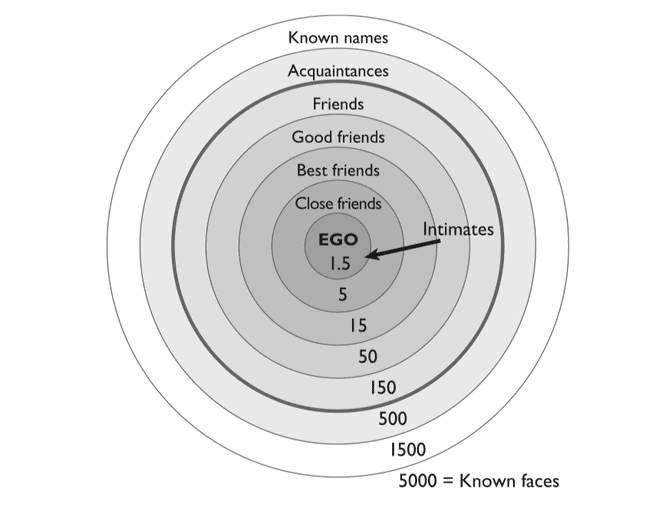 Robin Dunbar, the evolutionary psychologist, is best known for his namesake “Dunbar’s number,” which he defines as the number of stable relationships people are able to maintain at once. (The proposed number is 150.) But in a new book earlier this year, he also explained that the Dunbar number really isn’t a single number. It should be a series of numbers. In fact, he explains that relationships turned out to be highly structured in the sense that people didn’t see or contact everybody in their social network equally. The network was very clumpy.  The distribution of the data formed a series of layers, with each outer layer including everybody in the inner layer. Each layer is three times the size of the layer directly preceding it: 5; 15; 50; 150; 500; 1,500; 5,000. You can see a graphical depiction of the circles of friendship above.

As I write this piece, it is the day before Thanksgiving and I am thinking that it makes sense to keep with the theme of gratitude and all I am thankful for. And since I am writing this piece for MenLiving, I want to share with you how grateful I am for the men I have met in the spaces that are created here.  The growth of my “friendship circle” has been exponential and my life is richer for the men on this list. Today, I give thanks for:

And the many other men I have connected with and the many more to come.